When I first received the email, it almost felt like a badge of honor. I run a website popular enough to attract a marketing firm? Who wanted to pay me to advertise on my personal blog? Boom. Awesome. Until I realized what the hell it meant.

I said no. Politely. Thanks, but no thanks.

Not, mind you, from any moral high ground. It was more about — well,  for starters, I have my own arrangement with WordPress which gives me a cut of the advertisement that it automatically places on here, and cuts me a portion of the revenue, and I didn’t want to violate those terms of agreement. (You guys know those videos on the bottom aren’t things  I’m posting, right?) For another thing — I’m pretty sure my dad reads this and that makes me feel squicky. DAD, YOU SERIOUSLY SHOULDN’T READ THIS ONE I SWEAR TO GOD I WILL KILL YOU STOP READING RIGHT NOW. So I politely declined.

Now, I’m not saying there’s anything wrong with spicing it up and buying a sex toy every now and again! Go nuts. You do you. (Hey-oh!!) But I am saying that there’s something a little messed up about disguising your advertising as actual content.

Look, the internet is amazing. The internet — at its best — feels like walking down a sunny city block where everyone you meet has something to share. Hello, world news! Didn’t see you there, new place to eat brunch! Hey there, indie band I just realized I like! Hello, baby monkey!

Advertisers on the internet — while completely necessary, and a fact of life — in my city block analogy, they’re the crackhead on the subway hassling you for change. And those sneaky ads in disguise — they’re known as “native ads” — are the WORST.  And after I watched this segment on the John Oliver show, it confirmed my initial convictions: Fuck you guys. I’m not letting you post about sex toys on my blog.

And look. I know that I’m not creating high art here. The most popular piece I’ve ever done was that semi-drunk rant that went viral. I used the word “fuck” like fifteen times. I’m not saying that I’m above posting about sex toys. But I think I am above shilling sex toys for a relatively small sum of cash.

So I did what I thought was best: I spent about a week of my life trolling Katie at the marketing firm.

Sorry, Katie. You seem genuinely lovely. You were nothing but polite and overwhelmingly sincere.

But you have to admit … you really should have seen this coming. 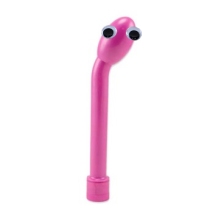 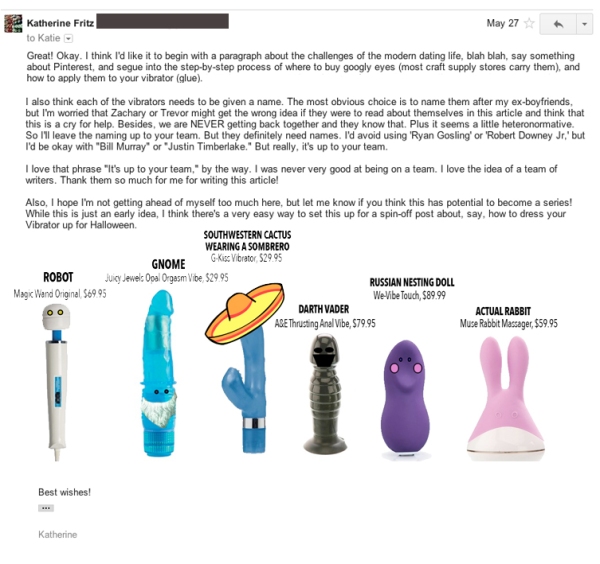 This is, and I am not making this up, the actual content that was attached to the article. THIS HAPPENED. I MADE SOMEONE DO THIS.

I have to admit, it made me feel almost powerful… in a really perverted sort of way.

I was having lunch with a good friend of mine the other day and we got to talking about our failed romantic exploits of late. You know what I’m talking about—the guy who seems really into you on OK Cupid only to never call you after your first date. Or even worse: the guy who wants to take things slow, glacially slow, as in he just got out of a ten-year relationship and can’t see himself getting physical with anyone until he’s sure he won’t make the same mistake twice. I mean, come on! Can’t a girl catch a break? We women have needs too!

My friend and I walked a couple of blocks, thinking that was the end of the conversation. But then we stopped in front of this little boutique I like. They carry all kinds of cutesy craft stuff—beads, stencils, fabric pens, etcetera. It got me thinking… DIY boyfriends! When I got home I was so excited about my idea and scrolled through hundreds of Pinterest pages for inspiration from the DIY crafting community. It turns out assembling your own personal boy toy is not even the craziest idea out there. And surely, I thought, there must be women much lonelier than me who would love to combine their crafting prowess with their fondness for their vibrators.

And thus, project DIY Boyfriend commenced! So, first things first: you’ve got to give the battery-operated man (or woman) in your life some eyes. Think back to when you were a kid and you made that pet rock in arts and crafts. Yep, those eyes, those sweet and sensitive googly eyes that will never judge you and, best of all, will never stray! You can find them at most craft stores, and oftentimes they come in bags of fifty or more. You’re also going to want to find a durable, non-toxic glue to adhere the eyes to your love machine. Good old Elmer’s glue is probably adequate.

The next email I received contained the phrase, “Unfortunately we are only able to work with you for this one article.”

That sounds about right.

So… yeah. I never took the money. And no one’s gotten back to me about DONGS IN SPACE yet, although I think it has great potential. Maybe a webseries. I dunno. I’ll work on it.

I want to make sure I end on this note, because I think it is important that we all leave with the right message:

37 thoughts on “This Post is Not Safe for Work.”