I want to be a hummingbird. I am doing whatever I can.

Yesterday, I wrote this piece, about a small hummingbird dropping a single drop of water onto a fire, one drop at a time. It’s a metaphor about injustice and fear, written in response to the terrorist activities in Paris and Lebanon. It’s about humans trying to do “whatever they can,” even if that action is minuscule and small. Even if it seems worthless.

Yesterday, one of my most trusted friends read it.

“… Do you get to call yourself the hummingbird if your contribution is just writing the blog post? That seems … easy. Like changing your facebook picture to that flag — you know, well-intentioned, a sign of support, but ultimately — kind of a pass. You’re not really doing much. You’re just — I dunno, displaying. There’s a difference.”

“I mean,” I say, knowing that he’s basically right. “I included those links at the bottom of the piece about what we can do to help Syrian refugees, or how to donate to Parisian Red Cross –”

“I know,” he said, nodding. “But it’s …. it’s missing this other, really important point.

Most of us want to be the hummingbird. But what if we don’t even know where to find the river?

What is it that any of us can actually do?”

It’s stuck with me all day, that question. What is it that any of us can actually do?

I am a writer and a teacher, and a friend and an artist. But I’m all of those things in Philadelphia, in America. And while I live in a country of people who are increasingly surging towards extremest ends of a political spectrum, a country that stands increasingly divided on issues of politics, religion, ethics, and morality, in my day-to-day life I am surrounded by people who mostly think like me, mostly look like me, mostly believe what I believe. I have a hard time understanding how something as destructive and violent and brutally senseless as those attacks could take place, because I’m surrounded by people who are equally shocked and horrified, people who feel as I feel.

The human beings who pulled the triggers on those machine guns are humans, as you and I are. They experience pain, as I do, as we do. And I can’t begin to imagine what sequence of events in their life led to that decision to walk into a public place, strapped with explosives and carrying a machine gun. How many times those angry men were taught to hate. How many hundreds or thousands of times they were taught that to incite fear is to wield power.

Those angry men were children once, too.

I can speak to the sequence of events in my life that led me to where I am now: parents who loved me, a childhood spent reading books in library seats, a college education, a battle with depression where words pulled me up and over and through. I can try to imagine the opposite: parents who were distant and uncaring, a fundamentalist upbringing where critical thinking was shunned, a lack of education, a promise of a better future. I don’t have to imagine too hard: it’s the story of thousands of people worldwide. I am fortunate. Many others are not.

And I think about the number of tiny moments that I’ve received racist or Islamophobic emails from older relatives and clicked “delete,” rather than do the work of attempting to combat fear with empathy and compassion. I think about the number of times I’ve just stopped engaging with people on Facebook because I’d rather not spend my morning telling a stranger on the internet that their speech is, in fact, hateful or ignorant; it never seems to make much of a difference, after all, and I’d rather spend my day doing literally anything else.

If I am only sharing my words with those who already agree with me, I’m not a hummingbird after all. I’m just a peacock.

There’s a stunning piece of journalism in The New Yorker today, detailing the story of a young woman named Megan Phelps-Roper. She’s twenty-nine, about my age, with blue eyes and creamy white skin that looks a lot like mine.

She’s the granddaughter of Fred Phelps, the founder of the Westboro Baptist Church. She was one of the young people on the picket lines outside of military funerals, blaming the deaths of young soldiers on America’s acceptance of homosexuality, shouting “God hates fags!” at mourning spouses and relatives. She grew up with these beliefs, and never had much of a reason to question them: her entire world was shaped around her family’s shared conviction that outsiders were evil and wicked, and her purpose on Earth was to preach this truth so that those wicked outsiders could repent.

In 2009, Megan joined Twitter as the church’s mouthpiece with the outside world. The article kicks off with this sample tweet, posted on World Aids Day: ““Thank God for AIDS! You won’t repent of your rebellion that brought His wrath on you in this incurable scourge, so expect more & worse!” 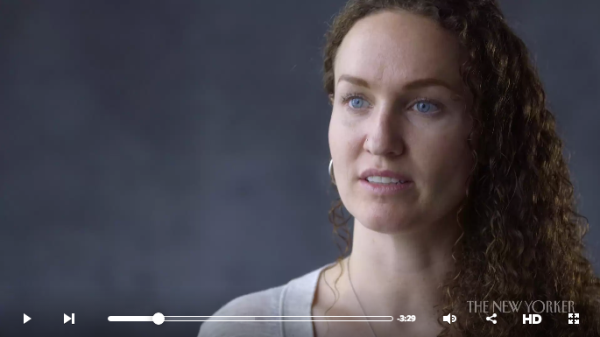 The article details the years-long journey that Megan went through, culminating in her leaving the church in 2012. Twitter exposed her to the outside world, to others who treated her with empathy and humanity, who took the time to question and challenge her beliefs, to poke holes in her logic without alienating her so much that she stopped listening. Her shift in belief feels agonizingly incremental, almost glacially slow. But a Twitter interaction with a stranger — then another, then another — caused her to think critically about one belief. Then another, and then another, until eventually her entire belief system came toppling down. Until she began to see the “others” not as wicked demons, and not as sinners, and not as enemies. Until she began to see others as humans, just like her.

Megan and her younger sister Grace had once held signs screaming, “Your Rabbi is a Whore.” After leaving the church, they were invited to speak to a Jewish conference, later staying with an Orthodox family for nearly a month. They picketed pride parades and gay events for decades. Recently, they attended a drag show and danced.

But an Orthodox Jewish dude living in Israel tweeting to her about “Gossip Girl” made a point of connection. And another, and another, until Megan was talking to this guy not as “other,” but as “person.” Not as “Jew,” but as “David.”

The people who pulled the triggers on those guns are people, too. And I don’t have all the answers for how to reach them. Nobody does.

But I’m gonna make a guess at how to start combatting those things in your own communities. Here’s what I think you can do, hummingbirds.

When you see something that responds to fear and violence with more fear and violence, call it out.
When you’re tempted to respond to hatred with intolerance, check yourself.
When you hear somebody conflate ‘Muslim’ with ‘Terrorist,’ explain the difference. And even though you might be angry or frustrated about it, explain the difference in a way that’s polite and not condescending.

Fact-check your news sources before sharing misinformation and fear.

Think about attending the services of a faith community that is not your own. (I did this in college and it changed my perspective in ways that I cannot adequately describe). Sit in the back row of a church or a temple, just for an hour. Look at the faces around you. There will be someone, inevitably, who reminds you of your cousin, sister, uncle, best friend. If you are welcomed, allow yourself to feel welcome.

When you hear someone who is not like you share their experiences, listen. (I struggle with this one. I always want to jump in with my own thoughts. I’m getting better. It’s worth it).

It’s just tiny drops on a raging fire. It’s not much.

But I want to do something.

I am doing whatever I can.

24 thoughts on “The Hummingbird, Part Two.”