This is Brock. He’s eighteen in this photo.

He’s a Stanford University student and an all-star athlete, a once-promising Olympic hopeful.

This is CJ. He’s sixteen in this photo. 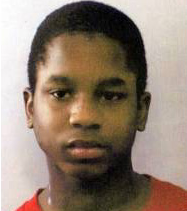 CJ grew up in Louisiana and has a long history of mental illness. He’s been diagnosed with schizophrenia, and was prescribed a long list of medications including Wellbutrin, Abilify, Seroquell, and Hydroxyzine.

Both Brock and CJ are convicted rapists.

What CJ did was horrifying: he’s been convicted of the rape and assault of an eighty-one year old neighbor. The brief from his trial is difficult and shocking to read; the elderly woman was treated in the ICU for fractures, bruises, and trauma consistent with graphic sexual assault.

CJ’s father stated to the local paper that “under normal circumstances,” he didn’t believe that he would commit a crime so graphic and heinous, but “without his medication, anything is possible.” CJ was found mentally fit to stand trial, tried as an adult in 2009, and sentenced to a lifetime of hard labor without the possibility of parole.

What Brock did was horrifying: he’s been convicted of raping an unconscious woman behind a dumpster, penetrating her with foreign objects as well as his fingers and penis. He attempted to flee the scene when he was discovered by two grad students, who held him captive until the police arrived. The coverage from the newspapers is difficult and shocking to read: the victim has issued a statement that she read in court, and it is the most important piece of writing I have read in a very, very long time.

Brock has been sentenced to six months in county jail. He will likely only serve three.

The judge, Aaron Perksy, cited Turner’s age and lack of criminal history as factors in his decision, saying, “A prison sentence would have a severe impact on him … I think he will not be a danger to others.”

I think he will not be a danger to others.

I suppose, then, that we should ignore the victim. That if he will not be a danger to others, it is acceptable that he was only a danger to her.

I suppose, then, that we should continue to show Brock Turner’s yearbook photo, rather than his mug shot, in the media. That we perceive him first and foremost as an “all-American college athlete” rather than “convicted rapist.” I suppose that will not be a danger to others. Especially not when paired with the evidence suggesting that there is staggering racial disparity in the justice system, particularly when applied to juveniles of color.

I think that he will not be a danger to others.

I think that the vast majority of rapes go unreported. I think that only two percent of rapists will serve time.

I think that there are 400,000 untested rape kits gathering dust on the shelves in the United States while rapists go free.

I think it is dangerous that cops do not believe rape victims. Which, for the record, they frequently do not. I think that every single college administrator, judicial system worker, police officer, and human should read this and understand:

In the past decade, neurobiology has evolved to explain why victims respond in ways that make it seem like they could be lying, even when they’re not. Using imaging technology, scientists can identify which parts of the brain are activated when a person contemplates a traumatic memory such as sexual assault. The brain’s prefrontal cortex—which is key to decision-making and memory—often becomes temporarily impaired. The amygdala, known to encode emotional experiences, begins to dominate, triggering the release of stress hormones and helping to record particular fragments of sensory information. Victims can also experience tonic immobility—a sensation of being frozen in place—or a dissociative state. These types of withdrawal result from extreme fear yet often make it appear as if the victim did not resist the assault.

This is why, experts say, sexual assault victims often can’t give a linear account of an attack and instead focus on visceral sensory details like the smell of cologne or the sound of voices in the hallway.

I think that Brock will not be a danger to others because he will educate college students about the “dangers of alcohol consumption and sexual promiscuity.”

From Brock’s victim’s statement, which I again encourage you to read in full:

I think that he will not be a danger to others.

The Brock Turner case is inherently dangerous to others. To us all. For teaching us that the trauma of being raped behind a dumpster is less important than the trauma of losing a swimming scholarship to Stanford.

For showing us that all the education in the world has not taught this young man, or so many others, the simple lesson that no one’s body belongs to you except your own.

Perhaps Judge Persky is right on one count: I don’t think that a long sentence in state prison will teach him how to respect women, to understand the value of consent, to learn that he is not entitled to shove himself into a woman’s body who has not explicitly invited him in. Prison doesn’t work, and I’m not sure that a lengthy stint in state lockup, even if he was only allowed to read the complete works of Audre Lorde and bell hooks, would do much good either.

But even if the system is fucked, can’t we at least pretend that justice for all is a thing? Because Brock Turner is emblematic of justice for all but the wealthy, the white, the elite, and the powerful.

I don’t know how I would have sentenced Brock Turner. But to slap him on the wrist is provoking immense outrage, none of which will change the fact that he raped a young woman. A young woman’s life is ruined. Brock Turner and his father don’t believe that he’s done anything wrong.

He’s not alone in thinking this way. A staggering percentage of young men don’t actually believe or understand that rape is rape.

And perhaps that is the biggest tragedy of all. That we don’t educate our children about consent. That we don’t believe our victims when they report their rapes. That we subject our victims to barrages of questions, interrogate and question their motives, reopen the wounds in the court of public opinion. And that even when our rapists are caught in the act, thrusting into a motionless woman behind a dumpster — even when rape is rape is rape is rape is rape, cannot be anything other but rape, caught-in-the-act unequivocal rape rape rape rape, that was a rape and will always be a rape — even then, in the case of the wealthy, we treat the rapist as white, as an athlete, as “once-promising,” as cautionary tale, as a human, as Brock… before we treat him as a rapist. That is the power of privilege. That is the danger of it, too.

That is a danger to others, Judge Persky.

That is a danger to all of us.

** To read the victim’s statement in full, please click here.**