Amidst a news cycle that’s increasingly equal parts Tom Clancy novel and the Grape Stomping Reporter, this bit from a Washington Post profile of Karen Pence, the Vice President’s wife, caught some eyes. 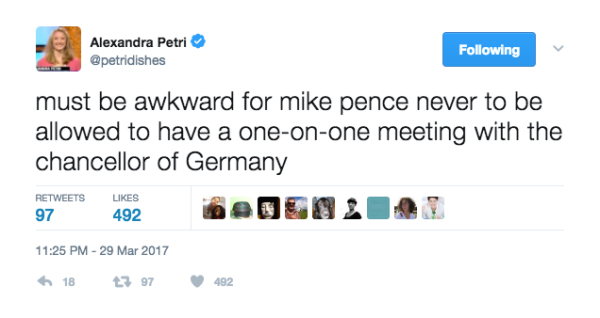 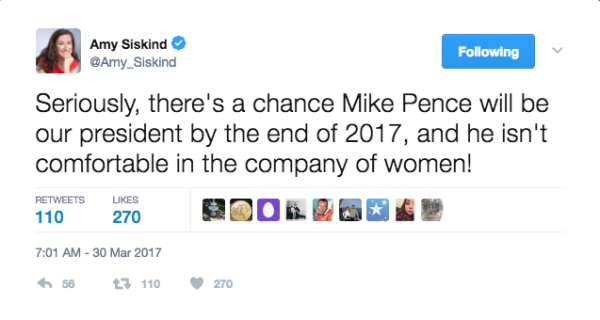 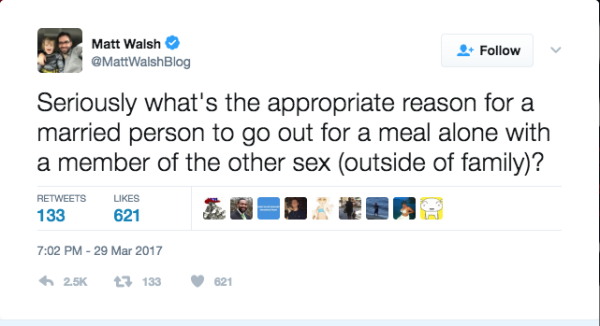 … which prompted the inevitable backlash to both.

Mike Pence choosing to not have private meetings with women who are not his family or his wife is a fairly common conservative or fundamentalist Christian belief. It’s one that pervades a lot of aspects of our culture. It’s one that my own mother generally agrees with — I remember having a conversation with her about it years ago, back when I was writing angry letters to this guy rather than writing them on this blog. For her, and a lot of other people, it kind of harkens back to the “can men and women really be friends?” thesis of When Harry Met Sally – sex is always gonna get in the way, so it’s just best not to risk impropriety, or even the appearance of it, in your personal or professional life.

For a lot of people, myself included, that argument is bunk because, well: I have plenty of male friends and professional colleagues that I value, treasure, and love, yet have no desire to see naked; because sexuality exists on a fluid spectrum; because sexuality and gender are actually entirely separate issues; because this argument seems especially specious when confronted with the reality of homosexual relationships and friendships, etc.

But it doesn’t change the fact that Mike Pence’s personal cultural and religious beliefs dictate that he doesn’t privately meet with women who are not his spouse or his family member. And he has every right to believe those things and practice those beliefs. He is an American citizen, afforded full freedom of religion in our country.  Take, for instance, this passage from Ephesians 5:

Wives, submit to your own husbands, as to the Lord. For the husband is the head of the wife even as Christ is the head of the church, his body, and is himself its Savior. Now as the church submits to Christ, so also wives should submit in everything to their husbands. Husbands, love your wives, as Christ loved the church and gave himself up for her …

O believers do not enter houses other than yours until you ask permission and greet its inhabitants; this is better for you perhaps you may understand. Then if you do not find anyone then do not enter them unless permission is given to you; and if it is said to you go back then go back that is purer for you; and God has knowledge of what you do. There is no blame on you on entering undwelt houses where are belongings for you; and God is aware of what you show and what you conceal. Tell the believing men to lower their gaze and to be mindful of their chastity: this will be most conducive to their purity. And tell the believing women to lower their gaze and to be mindful of their chastity, and not to display their charms beyond what may be apparent thereof; hence let them draw their veils over their bosoms and do not show their adornments except to their husbands or their fathers or their husbands’ fathers or their sons or their husbands’ sons or their brothers or their brothers’ sons or their sisters’ sons or their women or what their right hands possess or male servants free of sexual desires or those children who never knows the private things of women; and do not stamp their feet so that it may show their hidden adornments; and repent towards God collectively O believers so that you may succeed.

Mike Pence’s religious beliefs, like the religious beliefs of many Americans, aren’t always great for women’s rights and freedoms — even though a lot of women are happy practicing those same religious beliefs. Most conservative or orthodox religions prohibit women from serving in leadership roles within the church. There are a lot of passages in the Bible about how women should be subservient, or should not speak publicly, or are weak or should be modest in appearance and opinion. And if you are someone who practices those religious beliefs: great. I’m happy for your choice, even if it’s not one that I personally choose. We live in a country that values your freedom to practice your religion, and I will defend to the death your right to that freedom.

Muslim religious beliefs sound a whole lot like the religious beliefs of most conservative Americans. Seriously. Re-read the paragraph above, except swap in ‘Muslim’ where I say ‘Mike Pence’ or ‘conservative,’ and replace “Bible” with “Qur’an.” There is a whole lot of overlap between major world religions, and Christianity and Islam are alike in many respects.

All of the people yelling about the threat of Sharia law being imposed on America? It is really really really important that you understand the difference between Islam (a major world religion) and Islamism (an ideology that seeks to impose Islamic religious beliefs on a society by law).

So as long as Mike Pence’s religious beliefs don’t get in the way of his ability to govern effectively, we don’t anything to worry about. He is free to dine with whomever he wants, believe whatever he wants, and pray however he wants, so long as he is governing according to the will of the people, and not to the canon of his religion.

Except, of course, you could argue that Pence already is governing according to his own interpretation of religious law.

Take the instance of the 2015 HIV outbreak in Indiana, when Mike Pence was governor. His opposition to Planned Parenthood (on religious and moral grounds, as a provider of abortion services) shuttered many clinic doors in his state, including one in economically depressed Scott County. Scott County, left without a place for low-cost or free HIV testing, and ravaged by America’s burgeoning opioid crisis, became the epicenter of an HIV epidemic. While Pence eventually “prayed on it” and temporarily lifted the statewide ban on clean needle sites in Scott County, the statewide ban still exists and the Planned Parenthood in Scottsburg remains permanently closed.

You can look at his record on abortion, on Planned Parenthood, and on his controversial “Religious Freedom Law,” which acted as a backdoor channel to legalize discrimination against LGBT individuals. He has opposed the Matthew Shepherd Hate Crimes act, and has publicly stated that “homosexuality is incompatible with military service because the presence of homosexuals in the ranks weakens unit cohesion.” You can look at any of his statements where he’s said things like, “I’m a Christian, a conservative, and a Republican, in that order.”

If Mike Pence is a Christian, a conservative, and a Republican, in that order, he might have some ‘splaining to do with regards to the definition of “theocracy.” It’s an important question, and one that merits further parsing in the public sphere: do you represent the will of the people, and will you uphold their individual freedoms and liberties, even if your religious beliefs aren’t always compatible with the realities of gay people who are already married, or women who need abortions, or trans kids who just want to use the bathroom in peace?

Look, what Mike Pence said about his dinner arrangements was in 2002, and I have a feeling that if the German Chancellor requested a meeting, he might make an exception. And yes, there are excellent points to be made about “well, if he sees women as potential sexual temptations rather than coworkers, peers, and leaders, he’s only going to hire men.” Yes. That is all true.

But when we get down to it, Mike Pence’s dinner arrangements, in and of themselves, don’t concern me. Whether or not he can govern according to constitutional law, and not religious law? That’s the part that does.